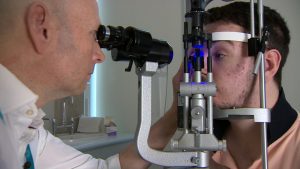 In January 23-year-old Jake Ternent became the first person with an inherited sight loss condition to be treated in the UK with Luxturna (voretigene neparvovec) for Leber congenital amaurosis (LCA). The operation was carried out at Moorfields Eye Hospital in London, just four months after the gene therapy was recommended for use in the NHS by the National Institute for Health and Care Excellence (NICE).

This ground-breaking procedure has attracted much media interest and was filmed by the BBC news team.

The operation was carried out at Moorfields Eye Hospital in London, just four months after the gene therapy was recommended for use in the NHS by the National Institute for Health and Care Excellence (NICE).

“I never imagined in my lifetime there would be a treatment available on the NHS.”

So says Jake Ternent, 23, the first person with an inherited sight loss condition in the UK to be treated with Luxturna (voretigene neparvovec) for Leber congenital amaurosis (LCA) caused by two faulty copies of the RPE65 gene.

Since then a small number of other patients have received the treatment at all four of the treatment centres. Jake, from County Durham, was a baby when researchers started developing the treatment back in 1997.

Jake says he was only told about the surgery two weeks before it happened.

He said: “I’ve been taking part in research at Moorfields for 15 years. At first they were a little bit worried I wouldn’t have enough retinal cells left to have the treatment but luckily I did. “I was really shocked when I got the phone call. They said to take the weekend to think about it and let them know on the Monday. I just thought they were having me on, it was mad.

“To have this treatment free on the NHS is mindblowing. My consultant told me this is groundbreaking, a new generation of gene treatment.”

While it is too early to say how successful the operation has been, medical professionals are happy with Jake’s progress.

He said: “I really hope this will stabilise my condition and that I’ll experience some improvement in night vision as it was terrible.”

Newcastle United season ticket holder Jake loves his football and wants to be a football coach.

“I can’t see much of the football but I go for the atmosphere and listen to the commentary using jacks provided for headphones,” he said.

In the meantime Jake is enthusiastic about having the other eye treated.

“I’ll go back to Moorfields in March for a check up and will probably find out about the left eye then. I’m definitely keen to go ahead with having the other eye treated. I’m so glad to have been the first to be treated.”

This article is taken from the Spring 2020 edition of the Retina UK Newsletter, Look Forward. See the full edition on our Publications page.