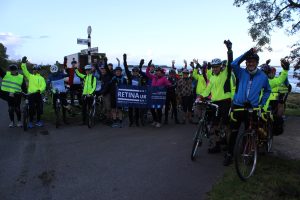 On 11 October, a group arrived in Whitley Bay, eagerly anticipating the weekend’s adventure. They had come together to take part in the Retina UK Tandem Cycle Challenge, a 100 mile cycle along Hadrian’s Cycleway. As they enjoyed food and drinks that evening, everyone chatted and got to know each other, sharing their excitement and worries about the days to come.

The following morning after an early breakfast, the cyclists piled into a coach and were driven to the start line in Bowness-on-Solway, a beautiful area on the West coast of the country. Luggage was sorted and bikes prepared, and following a group photo, a briefing from our partner cycling company Trailbrakes, and a pep talk from Emily they were off! 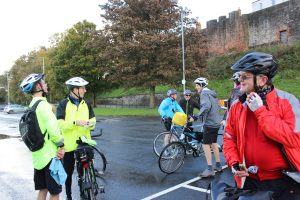 That day the 36 participants cycled 44 miles to the lovely town of Haltwhistle. The cycling route followed the coast, passing many miles of coastline, designated an Area of Outstanding Natural Beauty. They picked up the start of Hadrian’s Wall at Bowness-on-Solway and follow it through historic Carlisle with its fantastic Castle, Museum and Cathedral. Here was our first cheer point, where the participants enjoyed a quick stop to refuel before continuing east.

Beyond Carlisle the route climbed steadily into the foothills of the North Pennines. The climbs start to become more frequent and steeper, with one of the biggest climbs after Lanercost Priory, which was the second cheer point. They certainly needed the coffee and snacks to help them up those hills! After the climb the day finished with a lovely descent into the bustling market town of Haltwhistle, where a group had gathered to cheer them as they finished their first day of cycling. 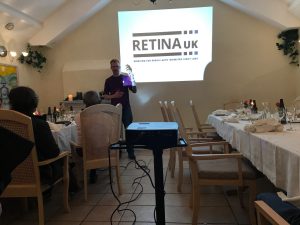 That evening the whole group and volunteers came together for a meal together at the Centre of Britain Hotel. The food was delicious and the drinks well-deserved after a hard day’s cycling. The atmosphere was buzzing as they celebrated the day’s work, with everyone enjoying discussing the route and forging stronger friendships.

After dinner, Paralympic gold medal winning tandem cyclist, and Retina UK Ambassador Steve Bate MBE stood up and gave a talk about some of his many adventures, including climbing El Capitan solo, the Paralympics, and his cycle in Alaska. He also talked about when he was diagnosed and the emotional journey he went on, which resonated with a lot of people in the room. Following his talk he invited people to ask him questions, and they were soon flowing. In fact, we had to cut them short as it was getting late! Read Steve’s blog on his website.

The next day dawned and everyone was keen to get started on the second and final day of cycling. It was 56 miles to Tynemouth Priory, and people were soon speeding away from Haltwhistle. The big hills were all at the beginning of the day, and with that knowledge they pedalled their way to the first cheer point in Newbrough and had a sing song before heading off. After this, the route followed the River Tyne, went through Newcastle and then on towards the sea. The rain was coming down heavily at this point, but it didn’t dampen their spirits. Many people simply said “once you’re wet, you’re wet!”

Waiting to greet them at the finish line was the team from Retina UK, volunteers and the team from Trailbrakes. As each cyclist arrived they were met with cheers, a Hadrian’s Cycleway medal and some Prosecco to celebrate the great feat under the Retina UK banner.

Thank you so much to all the participants, volunteers and the Trailbrakes team for making this an unforgettable event. So far the event has raised an incredible £18,000!

The feedback we have had from participants has been fantastic. Some quotes below:

“This was a marvellous event to be part of. At times it was exhilarating, at times it was tough. My sense of achievement at the end was fantastic.”

“It was fantastic being part of a team of people determined to complete the challenge no matter what the terrain or weather threw at them! Everyone supported one another and it was great to know that we were raising funds for Retina UK with every pedal.”

“Best event I’ve done. The atmosphere all weekend was just brilliant. And the people involved couldn’t have been nicer. It’s a great event to do anyway, then add on that all the money goes to such a good cause, makes it a must do.”

Below is a video and some of the many photos taken over the weekend.