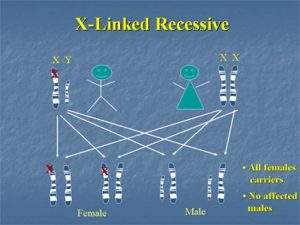 Female carriers have an X chromosome with the faulty gene and also an X chromosome with the normal copy. This normal copy of the gene usually ‘protects’ them from developing the full features of X-linked sight loss. However, some carriers of X-linked sight loss may have some signs of mild sight loss. There may be changes that can be seen in their retina either directly or with specialised retinal imaging, or abnormal function of the retina that can be detected by measuring electrical activity of the retina – a common test in retina clinic. The changes, although mild, may vary a great deal among individuals.

A carrier woman will pass on either one or the other of her X chromosomes to her children and it is a one in two chance whether she passes on the X chromosome with the faulty gene. If that chromosome goes to a son, he will have X-Linked sight loss. If it goes to a daughter, she will be a carrier like her mother.

To summarise this, an affected male cannot pass on X-Linked sight loss to his sons, but all his daughters will be carriers; and a carrier female has a 50 per cent risk or one in two chance of having an affected son, and the same risk of having a daughter who is a carrier like herself.