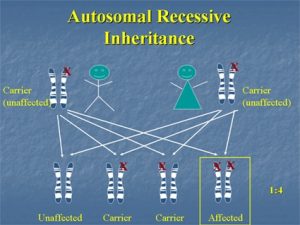 We all have several faulty recessive genes and they only may cause problems if we have a child with a person who carries a copy of one of the same genes.

Having introduced the idea of tossing a coin in the case of illustrating how Autosomal Dominant sight loss is passed on, think of both parents, each tossing a coin. Their risk of having a child with Autosomal Recessive sight loss is the same as both coins coming up heads; this comes to a one in four chance (25% risk of having an affected child). To describe how this comes about, there are four possible outcomes if you toss two coins, those are: both coins heads, both coins tails, coin one heads and coin two tails, and, coin one tails and coin two heads.

Only the first outcome of both coins heads corresponds to two faulty genes, one on each chromosome and this is the one in four of the possible outcomes. That is where we get the risk of an affected child being one in four. And the other three outcomes correspond to an unaffected child.

Let us look at the other three outcomes more closely, bearing in mind that they correspond to an unaffected child. In outcome two, both coins are tails, both genes are normal, so the child is normal and is not a carrier. Both outcome three and four have one coin heads and one coin tails, this is the same as one gene of the pair normal and the other faulty, exactly like the parents who are carriers. So, these three outcomes all produce a normal child but two in three of these will be a carrier.
To summarise this, parents who are carriers have a one in four chance of having an affected child (25%) and a three in four chance of having an unaffected child (75%). There is a 50% chance of the child being a carrier (two in four chance).

Finally, anyone who is affected with Autosomal Recessive sight loss has to contribute one of the faulty genes of the pair to their children, which means that all their children are carriers. An affected individual is unlikely to pass on the condition as long as their partner is not a carrier.

There is of course a small risk of the partner being a carrier, perhaps one in two hundred or less depending on the frequency of carriers of the particular faulty gene in the general population. Couples who marry within the family have a higher chance of a partner being a carrier depending on how they are related; and this is why having a partner who is a relative carries a higher risk of affected children.