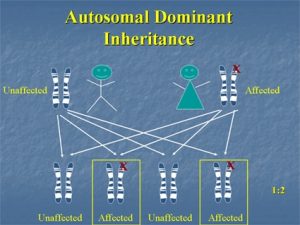 Autosomal Dominant sight loss affects men and women equally, and can be passed on from an affected parent to a son or a daughter. A person with Autosomal Dominant sight loss has a one in two chance (50 per cent risk) of passing on the condition to one of their children. This is because he or she will contribute one chromosome from each pair to a child. Depending on whether the chromosome carries the faulty gene or its normal counterpart, the child may or may not be affected.

The chance of a child being affected is therefore 50:50 in each pregnancy; think of this as the tossing of a coin and the chance of the coin coming up heads. Chance has no memory and neither does nature. You have the same chance of a coin coming up heads irrespective of the number of times you have tossed it. In other words, if you have Autosomal Dominant sight loss and you already have a child with the condition, there is still a one in two chance of the next child being affected as well.